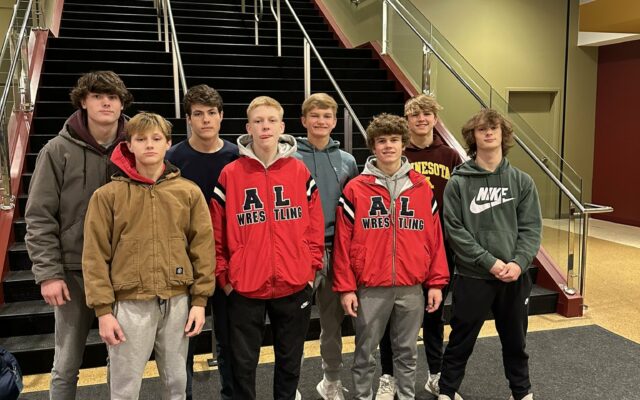 (Picture from Albert Lea Wrestling Twitter)
Albert Competed in the Christmas tournament in Rochester
Here are the results for the Christmas Tournament today.
106: Ryan Collins was 2-3 and placed 8th
113: Mike Olson was 4-1 and took 2nd
120: Logan Davis was 3-2 and took 6th
126: Aivin Wasmoen was 3-2 and took 11th
132: Brody Ignaszewski was 2-3 and took 8th
138: Nick Korman was 3-2 and took 11th
145: Mavrick Attig was 2-3 and took 23rd
152: Mason Attig was 2-3 and took 23rd
182: Kadin Indrelie was 2-3 and took 20th
As a team we finished 19th out of 34 teams
Tigers wrestle on Tuesday, December 20th as we head up for a triangular meet with New Prague and Tri City United
NRHEG Panther wrestlers were at Redwood Valley High School for the Redwood River Riot. The Panthers had 2 place winners. Junior, Annabelle Petsinger (120), was 3rd place in the girls division. At this point girls points are not associated with the team score. Senior, Makota Misgen (285) was the champion in his weight class. NRHEG placed 26th out of 35 teams.
Comments from Head Coach Shawn Larson:
Even though we had a total of 20 matches wrestled, our team competed very well. We were more aggressive, and more prepared to compete than we have been previously. We are definitely making improvements that people reading the stat lines might not see, but our coaches, team, and fans are certainly seeing.
Annabelle Petsinger wrestled very well on her way to third place. Annabelle was dominant in her wins. Annabelle faced a difficult setback in her semi-final match when she was put on her back after gaining a 10-point lead. It is unfortunate that Annabelle gave up the fall in that situation, but I admire her picking herself back up and getting the next best thing she could at that point (3rd place).
Makota Misgen is wrestling very well for us right now. Makota deserves everything that is coming to him right now. He is working very hard on and off the mat. It was impressive to see Makota step up in a big situation and get three pins and a nice 3-0 win in the finals. Makota is our first champion at this tournament since 2014.
Upcoming:
Our next competition will be Thursday, December 22, where we will be in a quadrangular at Mankato East with Delano, and Waseca. This event will begin at 5:00. Thank you for your coverage of NRHEG Wrestling.
Bulldogs Third at West Hancock Tournament
Story by Head Coach Alex Brandenburg
Weather conditions created a change of plans over the weekend as the Lake Mills wrestling team was unable to travel to the Battle of Waterloo. Instead, the Bulldogs jumped into the Al DeLeon Invitational in Britt and led the team standings with only two weights left in the last round. Unfortunately, West Hancock and AGWSR picked up two pins each and moved past the Bulldogs. “We started off a little slow today and did not wrestle very well the first couple rounds,” said Coach Alex Brandenburg. “But I am happy to say, we wrestled much better as the day went on, especially in the final round. Lake Mills crowned a season high four individual champions. Lucas Oldenkamp continued his undefeated season with an 8-5 decision in the finals, while classmate Hayden Helgeson won 17-2 over the runner-up at his weight. Steve Brandenburg dominated the finals 11-1, and Garrett Ham captured his first career title with an impressive 12-8 win over a wrestler who had a 14-3 record on the season. Three Bulldogs finished as runners-up: Geraldo Vazquez, Beau Kaufman, and Wyatt Hanna. “We had some very good individual performances today,” Brandenburg said. “Having four champions and three seconds capped off a nice day of wrestling for us.”
Team Standings: West Hancock 235, AGWSR 229, Lake Mills 228, Central Springs 217, Sumner-Fredericksburg 112, West Bend-Mallard 90.
Finals: 106- Lucas Oldenkamp (LM) dec. Dawson Jacobson (CS), 8-5. 113- James Frerichs (CS) maj. dec. Geraldo Vazquez (LM), 10-2. 120- Hayden Helgeson (LM) tech. fall Jaedrek Bowles (AG), 17-2. 126- Teague Smith (WH) pinned Luis Sandoval (WH), 3:49. 132- Jacob Larson (WH) maj. dec. Noah Clikeman (AG), 14-5. 138- Steve Brandenburg (LM) maj. dec. Bo Gerbracht (AG), 11-1. 145- Kaden Abbas (AG) tech. fall Lincoln Blickenderfer (CS), 17-2. 152- Kellen Smith (WH) dec. Preston Prazak (CS), 4-0. 160- Garrett Ham (LM) dec. Noah Henderson (SF), 12-8. 170- Ben Puente (AG) dec. Beau Kaufman (LM), 9-2. 182- Creighton Kelly (WH) pinned Grant Henderson (SF), 1:58. 195- Kale Zuehl (WH) pinned Kyle Kuhlman (SF), 1:09. 220- Aiden Heitland (AG) pinned Wyatt Hanna (LM), :25. 285- Tate Miller (AG) pinned Colton O’Hern (CS), 1:11.
Other Lake Mills finishes: 3rd: Royce Peterson (126), Carter Christianson (132), Austin Stene (152); 5th: Eli Smith (145), Ethan Lawson (195); 6th: Noah Bloedel (182).