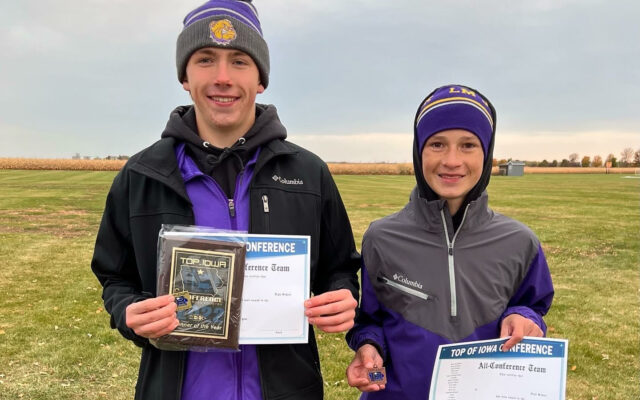 The Lake Mills Cross Country teams joined cross country teams from the 9 schools on the East side and 9 schools on the West sides of the Top of Iowa Conference at NIACC for the conference meet.  Both teams had to face some really cold weather and wind, and pushed through it mentally to battle and compete.

The boys team was lead by Justin Rygh (11th), who won the meet with a time of 16:36, his second fastest of the season, which was 15 seconds faster than 2nd place.  Justin earned 1st Team All-Conference honors.  Knute Rogne (9th) also earned 1st Team All-Conference honors by placing 10th, out of 100 Varsity Cross Country runners.  These two finishes, along with the next three runners, Sophomore Kade Van Roekel (18:59), Freshman Hayden Thompson (19:47), and Freshman Steve Brandenburg (19:51), all finished under 20 minutes.  The combined score led to a 4th place finish out of 13 teams, only 9 points away from Class 1A Newman.  Justin also received an amazing award voted on by all 18 coaches, he won the Player of the Year.
The Lake Mills Girls team had a second team all-conference runner in Josie Helgeson (12th).  She finished 28th with a time of 22:48.  This was Josie’s first time in cross country and for her to get on the 2nd team All-Conference Team, is an amazing accomplishment. The other girls came out running through the cold, and had times near their average from the last few minutes.  One even got a personal record on the course!
The Lake Mills Bulldogs now get ready for their State Qualifying meet on Thursday, October 20 at the Manly Golf Course.  With it being at 3:00, we really need those who can to come and cheer on the Bulldogs!
Boys Team Standings (13 teams)
1 Forest City 75
2 Garner Hayfield Ventura 81
3 Newman Catholic 123
4 Lake Mills 132
Girls Team Standings (10 teams)