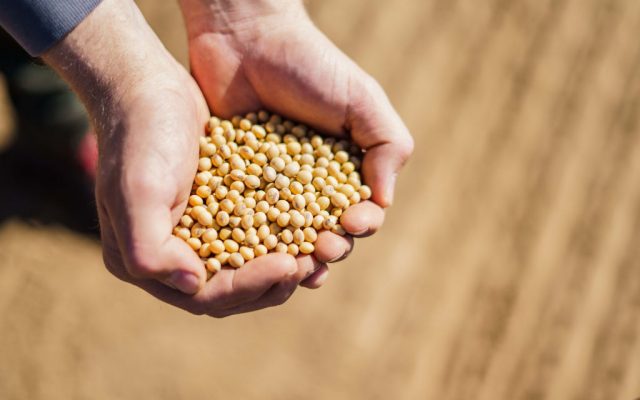 Minnesota soybean farmers – driven by farmer-led checkoff dollars – are turning the key and hitting the highway, rolling out a win-win campaign that gives traction to the broad benefits and uses of soybean oil.

Throughout the spring and summer, the MSR&PC and its 44 organized counties are utilizing Goodyear Tire & Rubber Company’s line of soy-oil tires to shine a light on value-added products and give back to their communities by donating sets of soy-based tires to their local law-enforcement agencies.

“Our board is very excited to launch this promotion,” Council Director Gene Stoel said. “It’s a way for us say thanks and honor the first responders in our community for all they do and the sacrifices they make to keep us safe. Additionally, these tires show not just farmers, but anyone who drives a vehicle, that using homegrown, sustainable products doesn’t mean compromising on quality or performance.”

The “Driving Soy” campaign is putting the pedal to the metal to promote the long-lasting value of soybean checkoff investments. The donation period to local sheriffs’ departments runs June 1-July 13. Each of the state’s organized soybean counties (Minnesota is the only state to support a county-level program) will have the chance to donate a full set of Goodyear’s Eagle Enforcer All Weather tires – designed specifically for first responder vehicles traversing rugged climates like Minnesota’s – to their county sheriffs’ department.

In addition to the county promotion, the Council will give away Goodyear’s popular Assurance WeatherReady tires, also made with 100% soybean oil, at this year’s Farmfest (Aug. 3-5) and Big Iron (Sept 13-15). A third set of the WeatherReady tires, which are made for everyday vehicles, will be available through an online promotion that will allow farmers to nominate worthy nonprofits in their communities.

With COVID-19 gathering restrictions forecasted to ease by summertime, the timing is right for the Council to make a big splash for its county program after a year marked by cancelled events. Promoting soybean oil via checkoff investments in renewable technology is the perfect vehicle to steer the Council’s mission to improve farmer profitability, said MSR&PC Chair Cole Trebesch.

“There’s a high level of enthusiasm with our county boards for this campaign,” Trebesch said. “We all know summertime is fleeting in Minnesota, and after the hardships of the past year, our county boards are champing at the bit to promote their commodities and checkoff investments.”

Goodyear’s relationship with the United Soybean Board (USB) dates back to 2011, when the company began looking at alternative, sustainable oils for its tires. Previously, the tire manufacturer, which sells about 40 million tires each year in the U.S. and Canada, used soybean oil in its racing tires. To date, Goodyear has released four lines of tires with soybean oil compounds: Assurance WeatherReady (2017), Eagle Enforcer All Weather (2018), Eagle Exhilarate (2019) and Assurance Comfort Drive (2020). About a bushel of soybeans is needed for each set of soy-based tires.

“It’s an easy sell, and it’s something that we actually need and is providing the premium performance in our products,” said Bob Woloszynek, Goodyear’s chief Engineer for Global Raw Material Development & Approvals.

Without the investment from the nation’s half-million soybean farmers, the project likely wouldn’t have come to fruition, Woloszynek said, citing the myriad budgetary and material challenges products face through the commercialization stage. Soybean checkoff funds afforded technicians the necessary resources to develop and improve the tire products.

“The checkoff dollars were a huge help. I firmly believe those checkoff dollars are a big reason Goodyer is where we are today,” he said. “Having that support from the United Soybean Board to supplement our work really kept it going, and we’re excited to continue working with them.”

Goodyear isn’t resting on its laurels. The Akron, Ohio-based company has increased its use of soybeans by 73% since 2018 and has pledged to fully replace all of its petroleum-driven oils with soybean oil by 2040.

“We have a bold, long-range goal … and that ensures we’re going to continue using products that contain soybean oil,” Woloszynek said. “There’s a lot of potential here.”

“We’re all looking forward to this summer and reconnecting with folks in our communities,” Stoel said. “This campaign is going to help our first responders and show how the soybean checkoff continues to work for Minnesota farmers. It’s a winning message that we’re proud to support.”

From the seed bed to tire tread, the soybean checkoff is helping the rubber meet the row. See you on the open road, Minnesota.