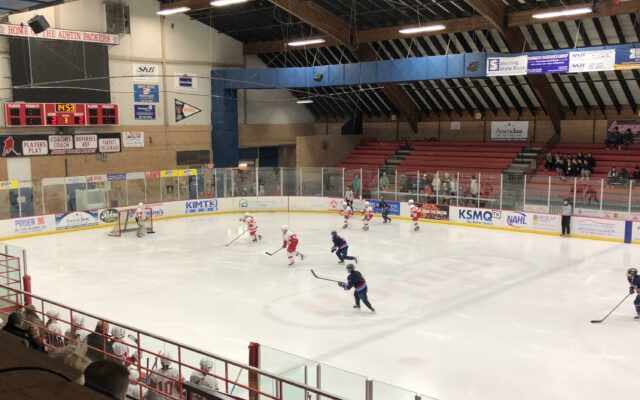 7th grader Morgan Goskeson scored on the power play with 3:23 to go as the Albert Lea Tigers edged their rivals Austin 3-2 in Big Nine Girls Hockey last night.  Goskeson ended up with a hat trick last night, with her first goal coming in the first period to put the Tigers up 1-0, Austin would tie things up in the 2nd at 1.

Goskeson would score with 2:47 left in the 2nd assisted by Lucy Stay, to put the Tigers up 2-1.  That lead would last 8 seconds, as Austin Junior Sarah Wangen would get her 2nd goal of the night to tie things up at 2-2.  It stayed tied until late in the 3rd, when again Goskeson scored her 3rd goal on the power play, assisted by Olivia Ellsworth.

Tigers were 1-4 on the Power Play last night, Shots on goal were even at 30 a piece.  Austin drops to 2-1, and Albert Lea improves to 2-2-1. Next game for the Tigers is Thursday December 2nd, when the Tigers host Mankato East