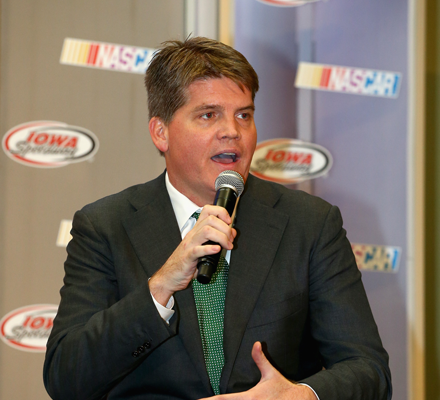 (Daytona Beach, FL) — Last month, the Sports Business Journal named NASCAR as the Pro Sports League of the Year for the first time ever. One of the driving forces behind NASCAR’s big year is a Minnesota native. Eric Nyquist grew up in Albert Lea and went to college at Carleton in Northfield, where he played college football. He is the senior vice president and chief communications and social responsibility officer for NASCAR. He helped them become the first sport to get back to competition out of the pandemic, the first sport to allow fans at events, and even more importantly, led a sweeping change in NASCAR’s general attitude toward social justice issues. One of Nyquist’s responsibilities was helping navigate the sport through the pandemic, as well as banning the confederate flag at its events. He calls removing the confederate flag from the sport is the highlight of his career. He says they’ve made NASCAR a more inclusive sport in the past year and that has been rewarding. Listen to Interview below with MNN’s Mike Grimm and Eric Nyquist