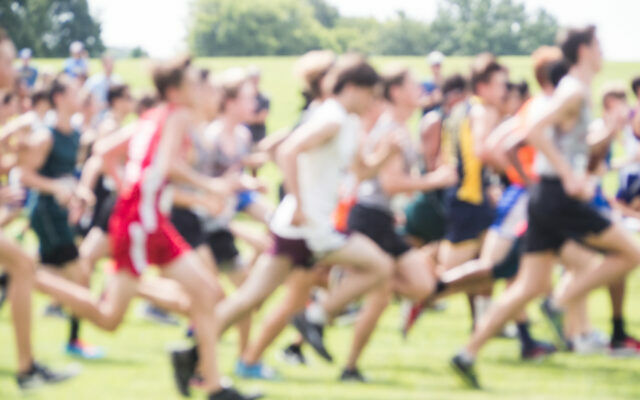 blurred mass of runners
The Lake Mills Cross Country teams came out to compete at Garner on 9/26/22.  The girls started out and fought the wind to have a medal winner from Josie Helgeson in 10th place with a time of 22:47.58.  Three other bulldogs got a personal record and it helped lead the girls cross country team to their highest finish ever with a 5th place finish out of 8 teams.   They achieved their best team score with 125 points!  I am super proud of them, and how they are growing and getting faster, plus understanding the team concept of their races.  They should be very proud of their effort, and improvement this season!
The Lake Mills boys cross country team came out determined and ready to run.  Justin Rygh won his 3rd meet of the season with a 17:02.88!   He was 15 seconds ahead of 2nd place finisher, Owen Almelien from North Butler.  Knute Rogne finished in 7th with a time of 18:12.81, and Kade Van Roekel rounded out the medal winners with 13th place with a time of 19:13.72.  Hayden Thompson broke the top 20 with a 19th place finish with a 1945:09.  Finishing off the top 5 was Lucas Oldenkamp with a 33rd place finish to give the team total of 63 points.  The Bulldogs placed second behind 2A host, Garner Hayfield Ventura.  They were able to avenge their loss by 2 points to Osage from a couple weeks ago.  Amazing meet with some windy conditions and the boys ran with a team focus, knowing their individual placement makes a big difference in the team score.  This effort and focus paid off with a great team point total of 63 points, their best so far this season!
Announced on Tuesday morning, September 27, the Boys are officially ranked 17th in the state of schools  in class 1A on the Iowa Track and Field and Cross Country page.  There were 20 schools listed and they broke into the rankings, which brought much excitement and will hopefully push their drive, focus, and confidence to a deeper level.