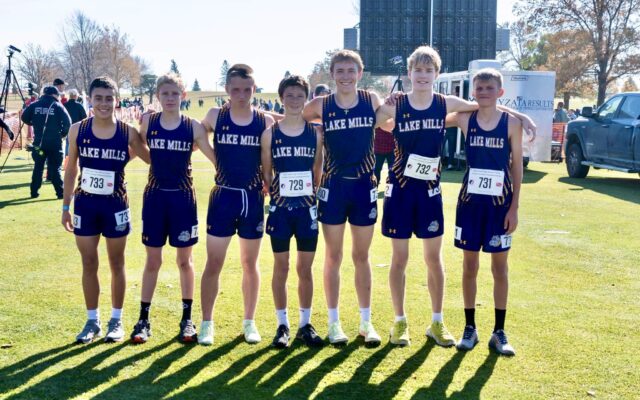 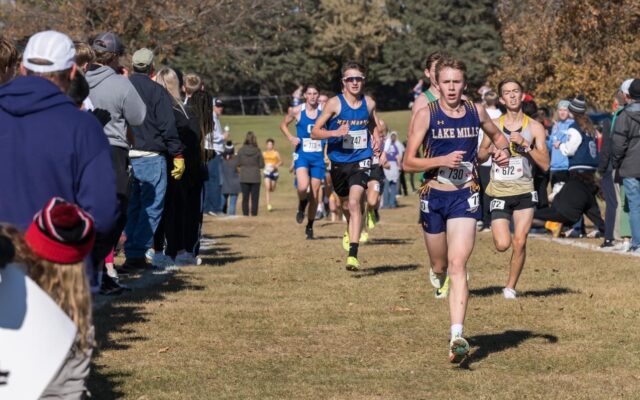 Awesome day for the Lake Mills Community as the Lake Mills Boys competed for the first time in school history as a team at state.  With 16 teams competing at the 1A Tournament, the Lake Mills Bulldogs came in rated 12 and Justin Rygh came in rated 9th in individuals.  A lot of Bulldog fans came to the Lakeside Municipal Golf Course in Fort Dodge to cheer on the Bulldogs, and it brought a lot of excitement to the meet.  The State meet is unlike any other, with so many fans, and the final stretch being lined with so many people, who are also many layers deep.  It was a unreal experience that the boys were able to soak in and enjoy the atmosphere and importance of the day.

Justin Rygh came out with a goal and ran a great race achieving a 7th place finish, becoming one of the individual state medalists.  He wanted to run a smart race, and was able to pace multiple people during that last mile to clinch his spot.  The other Bulldog runner ran well, in a new situation with so many talented runners in one space competing.  They came out placing 11th, a spot ahead of the estimated ranking by the state, which is something to be very proud of.  The top 7 runners for Lake Mills are all returning next year and that brings a renewed focus and intensity when looking on next season.  The team will develop new goals early, and push themselves to achieve them one step at a time.
I am so proud of these boys.  They have achieved times I didn’t know were even possible when starting this season.  They have come together and used their motivation for the team, to push themselves past what they thought they could do.  Achieving the dream of this boys cross country team to get to state was one of the most amazing moments of my life, it helps that I was blessed to experience that along with my son.