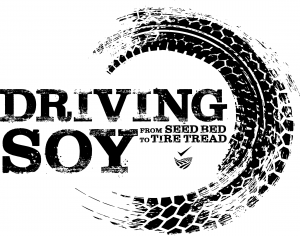 MANKATO – Did you know that, for the last four years, Goodyear has been producing lines of tires using soybean oil?

It’s true. Soybean oil in the tread of four lines of all-season Goodyear tires improves the tires’ flexibility, providing better traction in colder temperatures, and lowers petroleum-based use by 42-62%. Goodyear has increased its use of soybeans by 73% since 2018 and has pledged to fully replace all of its petroleum-driven oils with soybean oil by 2040.

That’s just one of many value-added uses of soybeans grown in Minnesota and elsewhere. Others include the bio-based asphalt-life extender RePlay and, of course, carbon-fighting biodiesel. The highway is alive, thanks to checkoff investments from Minnesota’s nearly 28,000 soybean farmers.

On Thursday, June 17, the Minnesota Soybean Research & Promotion Council will be showing off Goodyear’s innovative tires, which were born out of funding from the soybean checkoff, in an event at the Nerstrand farm of Derek Estrem. Minnesota Soybean will be visiting Estrem Farms for some tire talk, checkoff chatter and cold refreshments.

This will be a signature event in MSR&PC’s summer-long “Driving Soy” campaign, which is giving each of Minnesota’s 44 organized soybean counties the opportunity to donate a set of Goodyear’s soy-based Eagle Enforcer All-Weather tires – designed specifically for first-responder vehicles stationed in all-season climates like Minnesota’s – to its local sheriffs’ departments. Farmer-leaders and MSR&PC officials will be on hand to highlight how soy-based tires and value-added products increase farmer profitability, putting the soybean checkoff in the driver’s seat.

“This promotion is our way of saying thanks and honoring the first responders in our community for all they do and the sacrifices they make to keep us safe,” Council Director Gene Stoel said. “Additionally, these tires show not just farmers, but anyone who drives a vehicle, that using homegrown, sustainable products doesn’t mean compromising on quality or performance.”

Estrem is not only a farmer who serves on the Dakota/Rice County Corn and Soybean Board, but also a deputy for the Rice County Sheriff’s Department. Estrem grows soybeans and corn on his third-generation family farm with his brother, Michael, and uncle, David, along with his cousins. In 2010, the Estrems were named Rice County’s Farm Family of the Year.

“Our family is excited to host this event,” Estrem said. “The ‘Driving Soy’ campaign is a win-win for farmers and law enforcement.”