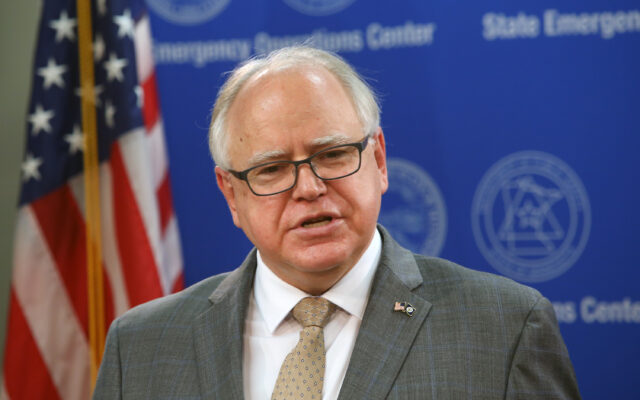 ST PAUL, MINNESOTA - JUNE 03: Minnesota Governor Tim Walz speaks to the press on June 3, 2020 in St. Paul, Minnesota. Earlier today the state's Attorney General Keith Ellison announced that charges of aiding and abetting second-degree murder and aiding and abetting second-degree manslaughter had been filed against former Minneapolis police officers Thomas Lane, J. Alexander Kueng, and Tou Thao in the death of George Floyd. Ellison also announced that charges against former officer Derek Chauvin were upgraded to second-degree murder. On May 25, Chauvin kneeled on Floyd's neck for nine minutes while detaining him on suspicion of trying to pass a counterfeit $20 bill. Floyd went unconscious and died at the scene. The other officer were part of the responding team. (Photo by Scott Olson/Getty Images)

The private event was held Thursday in the Governor’s Reception Room at the Capitol alongside Taiwanese officials, Minnesota ag leaders and Gov. Tim Walz. The agreement, which was last signed in 2018, is the culmination of soybean checkoff investments over the decades that focused on growing the Taiwanese market.

“It’s wonderful to participate in this agreement with our friends from Taiwan,” said Council Chair Joe Serbus, who signed the agreement on behalf of MSR&PC. “This is yet another example of how soybean checkoff succeeds over the long haul, ultimately improving the profitability of Minnesota soybean farmers and generating economic activity across the state.”

“This is a tremendous opportunity for Minnesota farmers to be the location where a trade deal of this size is implemented,” said Slunecka, who also attended Thursday’s event. “Of all the places they could choose to buy soybeans, they chose Minnesota because of the quality and long-term relationships.”

The TVOA has pledged to purchase between 2.6 million and 2.9 million MT (equivalent to between 96 million and 107 million bushels) of soybeans between 2023 and 2024. The estimated value of the agreement totals between $1.9 billion-$2.1 billion.

In 2021, the total value of U.S. agricultural and related products exported to Taiwan reached $3.94 billion. As of 2021, Taiwan is the seventh largest market for U.S. agricultural exports. The U.S. supplies about 27% of Taiwan’s agricultural imports. Since 1998, Taiwan has imported 40.5 million MT (equivalent to 1.5 billion bushels) of soybeans, a value of $15.1 billion.

“The relationship we have built with Taiwan is a direct reflection of what Minnesota soybean checkoff dollars can do,” Slunecka said. “It takes time and commitment, but we are fortunate our farmer-leaders are dedicated to doing all they can to increase the value of our soybeans.”

In a goodwill gesture during spring 2020, Taiwan donated 29 boxes containing 100,000 surgical masks to Minnesota’s first responders to assist during the COVID-19 pandemic.

“We have a relationship that’s rooted in respect,” Serbus said. “This was a great event, and I was proud to thank our friends from Taiwan for choosing high-quality Minnesota soybeans.”