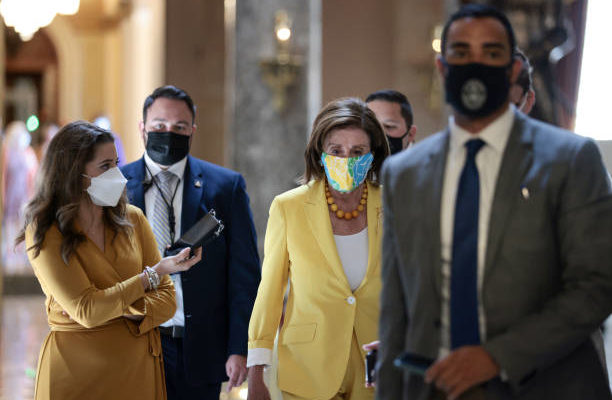 WASHINGTON, DC - AUGUST 24: House Speaker Nancy Pelosi (D-CA) speaks to a reporter as she walks her office at the U.S. Capitol on August 24, 2021 in Washington, DC. After a group of moderate Democrats pressed Speaker Pelosi to pass the bipartisan infrastructure bill first before taking up the budget reconciliation bill, a deal was reached in which the House will take up the Senate Infrastructure bill by September 27th. (Photo by Anna Moneymaker/Getty Images)

“Providing additional market access for higher blends of low carbon fuels in the budget reconciliation process will create jobs in rural communities, lower the price of fuel for consumers at the pump, reduce our dependence on fossil fuels, and, most importantly, decrease carbon emissions,” the legislators wrote.

They continued later in the letter: “We know that the climate crisis is happening right now and we need to confront it with a sense of urgency. Our goal is to decarbonize our transportation sector through an all-hands-on-deck approach that includes investment and incentives for both electric vehicles (EVs) and homegrown renewable fuels.”