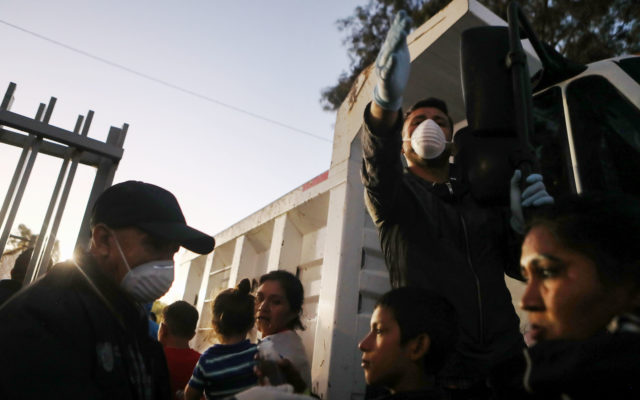 TIJUANA, MEXICO - NOVEMBER 28: Workers wearing masks and gloves direct migrants entering a temporary shelter set up for members of the 'migrant caravan' on November 28, 2018 in Tijuana, Mexico. Many shelter residents complain of overcrowding and unsanitary conditions at the shelter which stands within sight of the U.S.-Mexico border. Some migrants will be reportedly moved to a new shelter soon and other have set up tents outside the shelter gates. Around 6,000 migrants from Central America have arrived in the city with the mayor of Tijuana declaring the situation a 'humanitarian crisis'. (Photo by Mario Tama/Getty Images)

SIOUX FALLS, S.D. (AP) — The meat and poultry industry has historically relied on immigrant labor to do some of the most dangerous jobs in America, from employing refugees to a notorious record of hiring immigrants in the U.S. illegally. Now that reliance and uncertainty about the pandemic is fueling concerns about possible labor shortages to meet demands for beef, pork and chicken. Companies struggling to hire are spending millions on fresh incentives. Whether there’ll be long-lasting difficulties hinge on if employees feel safe, unemployment, industry reforms and President Donald Trump’s immigration policies.