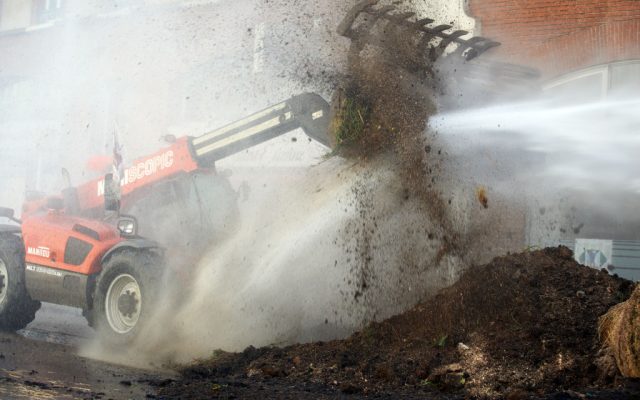 A farmer can't throw manure towards riot police by a police water jet. Several hundreds of farmers gathered in Toulouse with their tractors and with manure to protest against the negociations in Brussels about the Common Agricultural Policy 2023. The demonstration was called by the main farmers union, the FNSEA, and its subsidiaries the FDSEA and the JA (Jeunes Agriculteurs ie Young Farmers). Farmers are also concerned by ecology as they say the new regulations will block them to make their job correctly: for example, they must keep a strip without using biocides (pesticides, weedkillers, etc.) to protect neighbours. They also complain about prices too low. Farmers also throw manure and garbage towards riot police who used water cannon to repel them. Toulouse. France. April 08th 2021. (Photo by Alain Pitton/NurPhoto via Getty Images)

MADISON, Wis. (AP) — Attorney General Josh Kaul has reached a $242,000 settlement to resolve pollution violations resulting from manure spills in 2017 and 2019. The state Justice Department announced the settlements with K&D Manure Handling, Inc. and Wild Rose Dairy LLC on Monday. They were brokered earlier this month. State attorneys alleged K&D and Wild Rose caused spills in Otter Creek in Vernon County, resulting in fish kills. They also alleged K&D caused a spill in Bostwick Creek in La Crosse County, causing another fish kill. Republicans passed a lame-duck law in 2018 that requires Kaul to get legislative approval before signing off on settlements, but DOJ officials said law wasn’t triggered because the settlements were reached before lawsuits were filed.